Have you already tried to play guitar, bass, or any similar instrument from a REAPER MIDI composition? Then you probably found the integrated MIDI Editor and the new Notation Editor a bit difficult to read for this kind of task: contrary to piano where one note is associated to one key, a single note can be played at different places on your instrument neck, which make the translation from these notation systems not that straightforward.
Don’t worry anymore, I have a solution for you.

I had a complex composition I wanted to share to a friend so he can play the bass. His part was already programmed in MIDI, but transposing MIDI notation to fingers placement on a bass neck is not that handy. He needed something more optimized for his instrument, something he was used to: a simple tab view.

REAPER (since 5.20), offers a notation editor, but a lot of people are not that good for reading scores. A tab-like view fit guitarists special needs better because you have the string/frets associated to notes.

As Guitar Pro is a excellent software for displaying tabs, I exported the track to MIDI, and imported to Guitar Pro. That was terrible.

Composition in the MIDI editor. 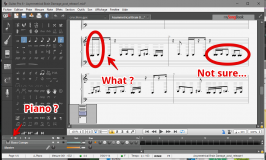 MIDI import in Guitar Pro: it could be better.

Other notation editors can be more solid with MIDI import, but fundamental issues with this process are still there:

Reciprocally, having a tab viewer integrated to a DAW offer this three major advantages:

That was it. Inspired by games like Guitar Hero and RockSmith, I decided to make my own MIDI Tab Viewer REAPER Script. It will not aim to replace a proper tab editor/viewer (which can do print oriented stuffs for example), but it could do just what I wanted: displaying MIDI notes in a side-scrolling window which would allow me to share/learn my compositions more easily, in sync with my projects.

And now, let me introduce you to my most advanced ReaScript so far: ReaTab Hero!

Triolets sequences with chords as accents.

Notes are sampled from non-muted MIDI notes of all MIDI items of a track that has been define as source (by a simple click on the Strings panel).

Because it is more performance oriented than composition oriented, you don’t need to quantize your notes and align them to the grid. You can even compose in free tempo!

Notes are displayed as trapeziums (almost rectangles) according to their length and according to their relative position from the cursor position, based on the look ahead time after it. This allows you to see the notes coming without having to bother about what is already passed.

You can customize your instrument (strings number, strings tonality, cases number) and the tab display (color schemes, look ahead time and mod etc) by entering the settings panel by pressing a any keyboard with the script window in focus. To toggle back, press another key.

I added a lot of features to make it customizable and user friendly. You will find the list below!

The following video s a simple overview of the main features of ReaTab Hero, with a tab for the song Beelzeboss by Tenacious D, from the soundtrack of The Pick of Destiny Movie Picture (copyright by SME – due to copyright, this video maybe not avaible in your country. You can check the second video if this is the case).

Detailed tutorial on how to set up a tab from an already existing song Guitar Pro tab:

Reatab Hero framerates drops when there are lot of notes on screen. I tried various things to optimize it, but I may have faced some REAPER limitations with GFX GUI engine.

At last, we have a workarround now! Thx to cfillion, we now have a new engine GUI for REAPER scripts, and good news is that it seems way smoother than GFX. Check below these two 30 fps GIF for comparison:

The new version is so much smoother!

So now included in the pack as a free update, a ReaImGui – smooth – version of the script, X-Raym_ReaTab Hero_ReaImGui.lua ! I still keep the original GFX version in the pack because this is pretty recent, a bit experimental and need testing and feedback to be considered solid, but it is very promising!

This is made possible by cfillion’s ReaImGui, available for free in ReaPack Reateam extension. The pack features a way to bridge any GFX script to ReaImGui engine, and we tested it with ReaTab Hero in particular.

There a few minor limitations for now, like you can’t have every character possible in MIDI markers names (it will be replaced “?” if not known), and a split second blur on text at setting panel initialisation. But there are other benefits like the anti-aliasing on shapes and circles which are better drawn. From now on, I would advice to use the ReaImGui version, cause it definitely seems better on almost every levels.

By purchasing this product, you will get:

This script uses the following ReaScript Libraries shared for free by other members of the REAPER community. These will be provided with the main script:

Many thanks to eugen2777 and spk77 for these! Also, thanks to mpl and heda for some very useful code snippets, and cfillion for ReaPack!

After purchase, installation instructions will be provided here and on the dedicated Purchase Confirmation page. License are valid lifetime. You will be able to enjoy updates and new scripts added to the pack.

By buying this product, you are supporting my free scripting. Thanks!

Customers can have basic support by loging and contacting me via the Contact page.