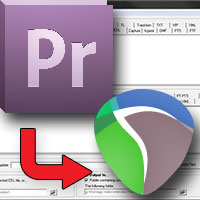 EDIT 25/02/2016: AATranslator’s main purpose is pure project conversion, and it does it very well, from an incredible varieties of formats. But if you only do video post-production tasks, and if you want to benefit from useful function dedicated to this, like reconformation, I advice you to check the recent Vordio.

AATranslator is still an incredibly useful software for all kind of projects conversion, from a DAW to another.

Because of its non destructive workflow, very powerful editing capabilities, cross platform-availability, very low price, and ability to play a large panel of video codecs (and SubRip subtitles support !), Reaper could be the DAW of choice for video post-production. How can we go from our video editing software to Reaper? What format to choose? What conditions the project must satisfy? After trying a lot of different worflows, I will show you the best I found, with Premiere Pro, on Windows. This workflow let you edit and mix the same files used in your Premiere Pro Project, with no reconversion, and with the same tracks disposition, using EDL files and the AATranslator converter.

I just noticed your post and actually read it with great delight – well done […] Excellent work!

Screenshots are made from one of my video projects, which is a fake interview. The video contained a lot a different media sources without being too complex, so it can be a good example.

Here is a silent (french) video in order to explain what we will do in this tutorial. The (english) text version gives greater detail for each step.

In order to be able to edit and mix the sound of your video project from Premiere Pro to Reaper using EDL, you have to be aware of certain things.

Premiere Pro is able to export a large variety of formats. The best one I found for exporting to Reaper after a lot of tests is the EDL, which allows the media items to be linked to the source audio files and maintains track names and doesn’t split stereo tracks. Export a sequence in EDL is quite simple : click on your sequence, choose Export > EDL, choose the channel 1 of your 4 tracks and Video Linked. Reaper will be able to restore stereo objects on your tracks without you have anything to say. And then, it’s done !

Premiere Pro can export EDL. Reaper can import EDL. But… not the same EDL. There is several variations of EDL files, and the one exported by Premiere Pro is not the same than the one Reaper can import. What you have to do is to use the Windows only AATranslator converter (Standard Version $59USD is enough), coded by Suite Spot Studios. The purpose of this software is to translate one audio project format to one other. It can do some audio extraction (from video clip) or certain audio reconversion if needed. It’s a complicated software for novice, but can be a great helper once we know the workflow we need. Fortunately, what you have to do is pretty simple : import your EDL in AATranslator and export it in Reaper Project File (RPP).

Now you have your RPP, you just have to open it. Reaper will ask you to locate the files of the project, so do it… and then, you are ready to go ! Full power of a DAW for your video project !

You can import a rendered video file of your project and import it in Reaper, which would be able to play it, if the exported format is common (mp4 – h.264 works fine, even in Full HD, depending of your computer hardware). You can’t mute the track (or else no video will be displayed) but you can put the volume track fader to -inf.

Once you finished your editing and mixing, export your audio with the maximum quality available for your project.

Step 5 : Back to Premiere Pro

Import the resulting file into your Premiere Pro sequence, mute the other tracks. You can now render your video for a final export.

Mac users who don’t have Windows session on their computer can use Winebottler, a free Windows emulator for MAC, and then, run AATranslator. An cheaper solution (without AATranslator) is possible using Vordio, a software for converting FCP X XML to Reaper Project File. The fact is that Premiere Pro export in FCP 7 XML, so you have to use the 7toX software in order to make a first conversion, from FCP 7 XML, to FCP X XML. FCP XML export has some limitations that I don’t appreciate (it split tracks, spread the item channel over several tracks, and we lose track name). I haven’t personally try this MAC OS workflow, so consider this as something to try rather than a turnkey solution. Note : Vordio and 7toX are very specific softwares, you will have a lot more conversion possibilities with AATranslator.

To export your audio project section from Premiere Pro to Reaper is very easy once you have the right tool and you know the workflow. The general workflow can be extrapolated to other editing softwares, but can need some small adjustments. Notice that some of those softwares could probably be used without AATranslator conversion, because of a direct compatible (with Reaper) EDL export (Note from Michael : The EDL that Reaper reads & writes is a Samplitude EDL which is only read by Samplitude/Sequoia & Magix Video Pro, Reaper & N-Track).

If you want to see the mixed in Reaper video… it’s here !