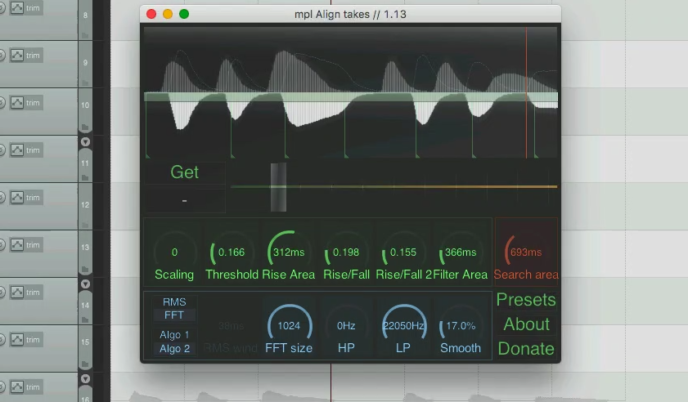 Two years ago, I wrote REAPER 5: User-Created New Features — Showcase of the most Notable Scripts / ExtremRaym, an article to promote ReaScript works made by the REAPER communities during the v5 development, which introduced Lua scripting language.

Scripts proposed by users on Cockos Forum tend to be lost and forgotten pretty quickly due to the amount of new threads created every weeks on the JSFX sub-forum. That’s why Robert Randolph decided to wrote an up to date ReaScript and JSFX scripts showcase:  Reaper Script Showcase, published on Aug 16 on his website audio-related website AdmiralBumbleBee.

As co-owner of the ReaTeam project, I personally take time to keep track of these user creations (writing reviews, bug reports, feature requests and simple feedback is a good way to remember them :P)… I was then able to help Robert a bit by letting him discover old gems lost on the forum, to promote them on this article.

Robert’s review focus mainly on scripts with visually appealing GUI, but a lots of very useful scripts have none. Nerveless, his list is the most complete to show what is possible with scripting in REAPER, as every scripts has animated screenshot and demo! When I see all we have achieve so far, I am proud of our little community of coders! It’s been a long way since REAPER v5 release, a lot of new top coders have joined the game, and old ones have gone very far in the ReaScript adventure.

You will notice that some of my scripts, like my Export Project to HTML and CSV and ReaTab Hero, as well as my whole Free Script Pack made it to the top!

I hope the list will encourage you to use scripts within REAPER (don’t forget Reapack helps of lot)… or even to code your own!

And thanks Robert for promoting other REAPER users works!

PS: Remember that most of these scripts are made and shared for free. Don’t hesitate to supports coders by sending them a little donation, if they propose it! 🙂