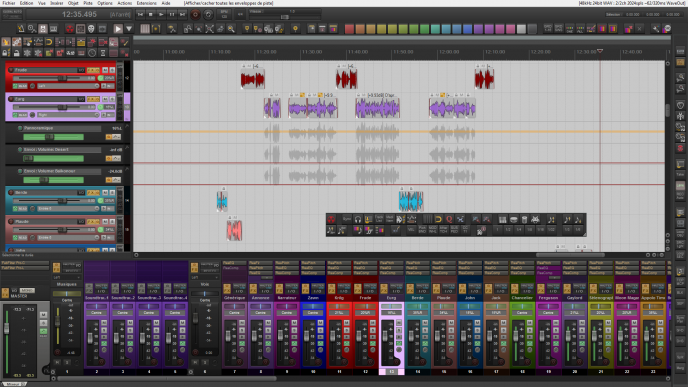 Reaper is the most customizable DAW of the market.
We can assign actions to shortcuts, to buttons on toolbars, create macros, write scripts, create plugins, and we can change the software appearance with a lot of freedom.
On this last point, there are a lot of themes online, but the higher customization level you can afford, is to create your own theme !

Because I wanted to have a GUI that satisfy all my needs, I didn’t wait a lot of time before beginning to learn Walter, the system elaborated by Cockos to allow users to write their own themes (a system which handle pictures, elements placement with a custom code language etc…), and I did it so intensively that I ended to write a Synthax Highlighting Color code for Notepad ++, a freebie well appreciated by the community 😀 (EDIT 2021: now I use ReaSyntax with Sublime Text).

So, I designed for my own usage a custom theme, X-Raym Analog, based on Default Analog 1.8 by Lerian, itself based on the Reaper 4 Default theme. It has become a heavy mod though, with lots of different images, colors and behaviors.

If you like the default v4 theme, but would prefer something a bit warmer with nice track color support, then this time can fit your needs!

Note: The screenshots are not all updated to match the last version of the theme.

REAPER v6.14 from September 2020 introduced the the Show Track & Sends in TCP feature. It allows you to insert, duplicate, remove, bypass, switch FX without even opening the track FX chain (I let you explore how to do that wit a combination of click, click and drag and modifier keys – ctrl/alt/maj).

This is nice to have and I wanted this to be well integrated into my theme, with a right-sided layout, just like in FeedTheCat themes (thanks to him for having providing instructions about this!) and in other DAW.

As years after my theme initial release, and despite the fact there are lots of other really great themes with nice features I still fallback to it because of his warm look, and because I know it is still used by other users as well, I decided to spend extra work on it.

It took me several days on it to make this update happen, mostly because I cease the opportunity to polish countless of other things in the theme (and because I had to fight about some complex stuff), especially Dual Pan pots in TCP and FX embed. That is why it is now considered as v2. Check Changelog section below for more infos. 😎

To activate this feature (in REAPER v6.14+), you can go to Options menu then:

Optionally, you to wrap these actions in a single custom action, and put it on a toolbar button so it can be easily toggle if needed.

The color chart came from the Default 1.8 theme, which propose a warmer version of the default green theme. I didn’t invent anything on this point, because it was my starting point. That why I don’t consider myself as a themer, but rather as an hardcore theme moder 😛

The default Pan Pot in the mixer a rotary one.

If a Pan Pot is optimum when there is not a lot of room (as in the TCP), I think that a linear slider correspond much better to our sound perception. Indeed, a Pan Pot Rotate from 7:00 to 17:00 (hour equivalent), despite the fact that the maximum amplitude is only Left / Right, (9:00 – 15:00 in hour equivalent).

To imagine the linear pan slider as a line that cross our head when we mix with headphones, or even better, as a line in front of us when we mix with speaker, line on which we place our instrument, seems to be more representative of the reality to me.

I have immediately found this idea awesome, idea that come from the Rado theme by Rado Records, so I decided to implement it in my theme, with the consent of the team 🙂

I have often around 100 tracks on my projects. I will be completely lost without tracks colorization.

The thing is that, by default, it is the background of the track name which is colorized, which I consider to be an ergonomic al issue, due to the fact that it can generates readability issues (yellow background under white text, it’s not easily readable); I find more pertinent to color the TCP background and leave the interactive elements (buttons, slider etc, but especially text elements…) intact. This way, the color appears clearly, not just like small vignette, and don’t interfere with text.

The thing is that by default the colorization of tracks is not perfect. Some colors are not clearly visible, especially when selected, because of the blending mod applied to these colors.

Hopi tried to correct this problem in a custom theme inputting borders around selected tracks, but some tracks colors still had trouble (colors made the borders disappear when the tracks is selected).

I had the idea to draw shadows and textures in the TCP, and to define the selected tracks as flat and brighter, and I tested it with every tint were good : it works ! 😀

All the TCP and MCP have been desaturated to not interfere with color tracks chosen by the user.

Notice than pan information on the MCP are displayed on a dark grey background in order to be clearly visible no matter the color of the track.

By Default, when a take is selected, it gets darker, which, I think, is not very intuitive. Selected items have to be highlight, literally.

So I decided to have a more lighter selection take color.

More, this color is now customizable into the preferences panel. I have to get rid of the default texture image but it’s not bad : we found the same behavior I set for TCP (selection = flat, without shadow).

The default theme provides responsive TCP, it means that the elements appearance (position, width…) inside the TCP are adjusted, according to the width of the TCP, which is great. But… It is too responsive.

There is so much levels of responsivity that there is no consistency anymore. Thus, the more we widen the TCP, the less there is lines attributed to the track control, which provoke some counter-intuitive things : for example, you want to see a track title a bit long, you widen the track, and BAM, the buttons are merged, a line is deleted, and you see even less characters of the track title than before. You should have rather contract the track panel in order to widen the track name field…

So, I locked the responsivity on three lines maximum and reduced the number of key width to consider, which give a lot more consistency.

If you want a comparison with the original, click here !

dB Scale in the MCP

I really wanted that feature, so much that I implement it to every MCP layout that could receive it ! 🙂 So useful…

Thanks to Marek for the tricks about the Vu-Meters ! 🙂

By default, track envelopes are very similar to casual tracks, which is not very handy.

At the beginning, I thought about indent them as in Cubase, but there was a small things I didn’t like when the indentation number was too high (if the track was in a group inside a group inside an other group), which was not very ergonomic too; Despite the fact a lot of people were interesting in that (11 000 views on the Cockos Forum), I needed a real difference.

That’s why I decided to set it very dark (with white text), and to add shadows and textures so that they appear below (in a 3D way) the tracks they refer to.

This is far more pleasing this way 😀

The position of the envelopes button has also change to fit the space better.

I kept (but fine tuned) the black layouts from Default Analog 1.8, I think they are gorgeous and perfect for my group/bus tracks. 🤗

An empty track with no buttons, for both TCP and MCP : nice to make visual separation.

Rado’s Theme Buttons are included in the theme itself ! their are gorgeous, and perfectly integrated with the other buttons ! You will have more possibilities for your custom actions !

Small changes on grid appearance, odd and even lines, windows etc. have been done, but I will be impossible to list them here.

A particular attention has been made on consistency. For eg, even in the default v4 theme, the buttons read/write/latch etc. can change of colors, depending on some track layouts. I decided to apply the same color to all the disposition.

Finally, the source code was optimized to avoid some redundancies, unwanted lines breaks and indentations, and to group elements from the same type.

This dark version is just a color file (.ReaperTheme) to put next to the main ReaperThemeZip file, as it uses the same images as the main theme.

I advised you to set some Dark TCP and MCP layouts as default in the View → Screensets/Layouts REAPER window for maximal effect.

It is also expected that you use dark theme in your OS. Note that because full dark theme isn’t accessible in Windows 10 without using third party tools (explained in this thread), some elements which are based on the OS like scrollbars or message box window background stays white. That is why I kept most window grey rather than putting them dark, which which is a bit too contrasted (dark background with white scrollbars is a bit distracting IMHO).

I may include it a reapack repository at some point, but for now, I think manual download is good, to let you make manual backup if necessary.

You may consider doing a backup of your current theme colors if you have modified them. For that, go to Action list, and find the Theme development: Show theme tweak/configuration window action, run it, and click on Save Theme… button. You will then be able to reload it, though I encourage you to only copy the necessary values rather than the whole thing. Doing that though is a bit complicated for the non initiated, I may write how to it in details if required at some point.

Use this if for some reason you need to make backups.

Open the REAPER Menu → Options → Show REAPER resource path in explorer/finder…, then place the theme file under the ColorThemes sub-directory.

Lots of time was spent to make this time satisfy my requirements and taste.

It can still evolve, so please follow the reaper forum thread Theme: X-Raym Analog for staying up to date.

Feel free to modify it to adjust it to your preferences, via the Theme theme window which you can find in the action list.